Out of tragedy came a miracle

I have that comedian’s syndrome.

You know the one where the person on stage can make the whole room laugh but when one person doesn’t….HORRORS! Apparently there had been some discussion about “repeat” speakers at events so I thought I would tell a story of the miracles that come from being a repeat speaker.

My dad wanted me to be a Dale Carnegie Course graduate for speaking when I was in my 20’s and I didn’t get to use my certificate much because no one really had a need for an obese speaker. I wasn’t a stranger to the stage because of playing Cello and singing and playing guitar but speaking was different. After losing the weight I fell into it totally by accident. My dear blogger friend Traci asked me to explain how I got the opportunity to speak and it evolved from an unusual storyline. It involves some tragedy that was followed by a miracle. 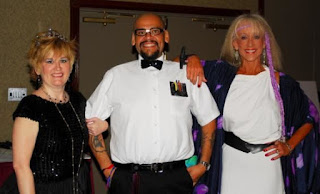 When I attended my first weight loss surgery event (Obesity Help 2004 Arlington, TX) I was too afraid to go alone. I volunteered to be the official photographer. After working closely with staff and continuing to volunteer for the next 3 years I had worked hard and begged to get a coveted break out session at the upcoming national California event. It was a magical experience and the 80’s party was one of the best times I’ve had dancing in years. I even wore some clothes I saved from that crazy time in life. This is Debra, Ramon and myself at that party.

Again because of the contacts made at that conference I was given more opportunities to speak and each time I spoke was as much like birthing a baby as I can imagine. Working for hours putting together my information…trying my best to figure out if what I say is relevant to as many as possible. I appreciate each and every person that attends, I don’t want to let them down, and I pray that I say just one thing that can change their lives. 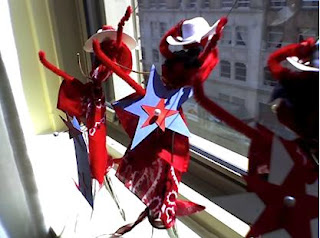 In September of 2007 we had an Obesity Help conference in San Antonio, Texas. Besides preparing a talk I had also spent hours making some centerpieces for the tables for the Texas themed event. They were dancing cowgirls with hats and lassos. My friend Debra had brought the huge candles from her son’s wedding and we were rushing to get it all set up in time. I had a raging eye infection and was trying desperately to shoot pictures when I really couldn’t see. Rushing back to the room to get ready I was waiting for my husband to arrive for the dance when I got a phone call that would bring me to my knees.

Earlier in the day I had spoken and had also done a yoga demonstration and decided to use some music and photographs in the background. The images were of beautiful flowers 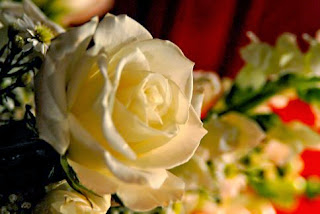 sent to me by an incredible woman named Alice Neff that I actually met on Dr. Phil’s forum. I had corresponded with Alice for 9 months and as a gesture of appreciation for my support she sent me flowers when she could barely afford to feed her special needs daughter Hillary and the many stray cats she helped. We bonded over the cats and we discussed how each day it was harder and harder for her to lift and properly take care of her daughter. She was scared to death about allowing the state to take care of her because she had experienced some abuse by the system before. She loved her daughter Hillary so much that she rarely ever allowed herself to dream but she knew if she got the surgery that she would be able to take care of Hillary. We wrote everybody we could think of for help.

The call was about Alice.

She had committed suicide by leaving the car running in the garage.

She had put her daughter in the car too and even rounded up the strays that she knew no one would take care of.

When I picked myself off the floor I had no choice…there was a function to go to and not many would know until the next day.

Out of tragedy come miracles.

To tell this properly would require a novel so the shorter version was that Dr. Carcamo from Nix Health Care heard the story. He heard that Alice committed suicide because she was unable to have weight loss surgery and he said he wished he could have saved her. As I rode in the elevator with him to his office to be photographed, he told me an incredible story about dealing with death that his father who was also a doctor had told him. He said he couldn’t save Alice but he could save another and that’s what he did. He arranged surgery for our beautiful Monica who had tried to have surgery for 4 years. There were so many people involved in this story and with each story there are so many layers, so many reasons one person talks to another and does a favor for another and so on and so on. This doctor saved my friend’s life and each time I see her face I see the life that was given to her. 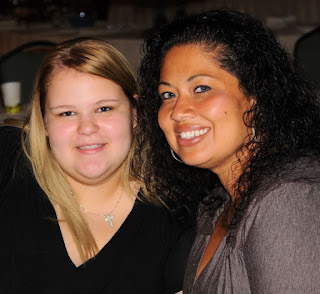 Monica joined in with Debra, Ramon and I to help a teenager named Corina. Dr. Alvarez was our angel that day as well as Nina who rode with Corina on the day of her surgery.

Although I have been a repeat speaker at these functions, I could not be more appreciative at the last event because my dad finally got a return on the Dale Carnegie course. My mom had passed away from cancer when I was at my heaviest and never saw me thin. I will be forever grateful that my dad was in the audience with my step mother Betty and sitting at that same table was Monica….the life that was saved when Alice lost hers.

It has taken me a long time to tell this story but now there is a good reason why. A wonderful woman named Toni decided there should be more stories just like this….finding a way for those in need to get weight loss surgery or even reconstructive surgery! She formed WLSFA.org which is a non-profit organization that does just that. They have already designated who the first grant will go to and you can read about it here. If you have a moment and can give you can either contribute by writing a check or clicking on the pay pal button on the top left of my blog. (If you write a check they get all of it but they will take a pay pal donation too). Anything you send makes a difference and if you’ll join the site you can also donate your talents too. I honestly can’t think of anything I’ve felt better about in a long time.
When I look at the picture of Monica and Corina above I see two beautiful women that just needed some help. I see the possibilities of the miracles that the WLSFA can make happen for so many. (By the way, Monica and Corina will be attending the Obesity Help Houston Event in November.)
Out of tragedy came a miracle.
WLSFA is going to make some more…
Love and Light and Smooches,
Yvonne